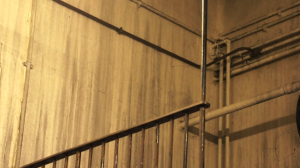 Summerhall will present a major installation by Polish artist Robert Kuśmirowski. Kuśmirowski, who lives and works in Lublin, specialises in transformed spaces, and intensely realised transformations of reality in general, and history in particular. This will be his second solo show in the UK, following the popular Bunker installation at the Curve Gallery at the Barbican (2009). He has also presented solo exhibitions at the Berlin Biennale (Wagon, 2006) and the New Museum, New York (Unacabine, 2008).
Pain Thing is a powerful yet playful installation relating directly to the existing fabric of the former veterinary hospital at Summerhall. Witness an unsuccessful experiment, as it starts to live its own life