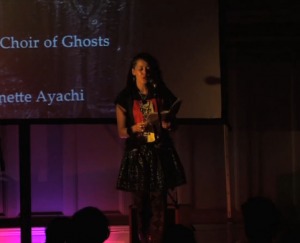 Poet Janette Ayachi performs two poems at Neu! Reekie! #39, one inspired by her time working in the National Galleries in Edinburgh, and one on the topic of death.

Ayachi studied English Literature and Film/Media Studies at Stirling University, then continued her education at the University of Edinburgh where she completed her Msc in Creative Writing. Her work is described as self confessional and Baroque, but contains a strong Gothic sensibility.