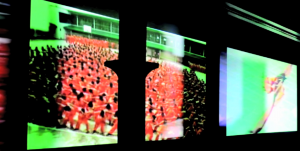 Carolee Schneemann is a pioneer in many artistic disciplines. Having consistently challenged concepts of sexuality and gender identity in the fields of painting, sculpture, installation art, video art and, most importantly, performance with key works such as Meat Joy (1964) and Interior Scroll (1975), Schneemann broke new grounds within the Happening and performance fields subverting taboos facing women artists in the 60s and 70s.
Schneemann will install three major video installations at Summerhall during this year’s Festival – ‘Precarious‘ (2009), ‘Devour‘ (2003) and ‘Infinity Kisses – The Movie‘ (2008) as well as displaying a never before exhibited photographic series where she performed ice skating naked in London while holding her cat.
During the first week of the exhibition the artist will also create a major new work in situ on one of the walls of the Summerhall galleries.
On Saturday 4th August at 3pm Schneemann will give a performative lecture entitled “Mysteries of the Iconographies”. This event will be free but entrance will be by ticket only.