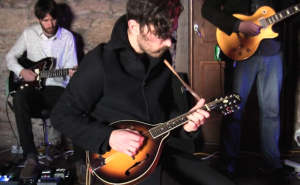 Delta Mainline is a seven-piece band based in Edinburgh that just finished the recordings for their debut album. This is an interview with the band about the making of the album and pieces of footage from a live session at Inch Community Centre, where the band performed two songs from their coming album.

The video is filmed and edited by Mikkel Andersen who is an exchange student from Denmark studying at Napier University in Edinburgh. He got in touch with Summerhall TV because he was interested in making videos with local upcoming bands.

The sound recording from the live sessions is made by Paddy Gordon from BAAD Sessions.

Delta Mainline’s debut album will be out in spring 2013 and following that the band will do a UK tour. Read more on: www.facebook.com/deltamainlineofficial