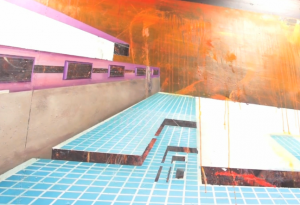 Stephen Thorpe’s exhibition “Once It’s In You It Never Goes Away”, begins at Summerhall on 15th December 2012 and lasts until 22nd February 2013. Stephen discusses how he’s approached his new work and the processes behind it. He was also recently awarded the Saatchi “Places and Spaces” prize, an international competition, for his 12 by 10 foot canvas “False Histories and Confusions in Time 1886″.