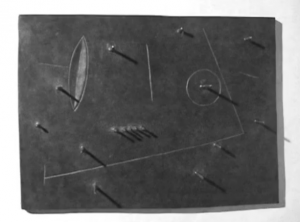 Scottish artist William Turnbull has died at the age of 90. After serving in the Second World War as an RAF pilot, Turnbull went on to the Slade School of Fine Art to study. His paintings and sculptures are featured in the Tate, National Galleries of Scotland as well as Chicago, Los Angeles and Washington.

Simon Beeson’s film Play/Ground extends William Turnbull’s invitation to the “viewer to become an imaginative participant in a miniature world, placing objects in relation to one another on a board representing the ground”.