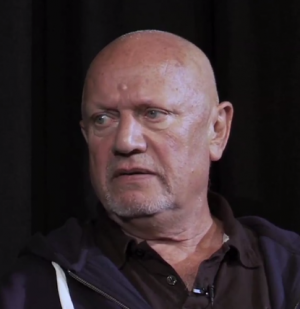 Traverse in Time is a series of panel discussions that look back at the rich history of Edinburgh’s Traverse Theatre, and the individuals who were involved in its illustrious past. Taking place at Summerhall on Tuesday 6th August 2013, this is the second of ten discussions and features writer, producer and actor Steven Berkoff.

The discussion is moderated by Dr Shaun May who has worked at the University of Liverpool’s Philosophy department as an AHRC funded Postdoctoral Research Associate on the project, ‘Patterns of Thought: Art and Philosophy for Children and Families‘. His doctoral research entitled ‘You Have to ‘Be There’: A Heideggerean Phenomenology of Humour uses Heideggerean phenomenology to elucidate what he calls the ‘hermeneutic conditions’ of humour – the structures that ground comic intelligibility.

Steven Berkoff is an English actor best known for his performances in villainous roles, such as Lt. Col Podovsky in Rambo: First Blood Part II, General Orlov in the James Bond film Octopussy, Victor Maitland in Beverly Hills Cop and Adolf Hitler in the epic mini-series War and Remembrance.
Berkoff is also a noted playwright and director, with a unique style of writing and performance. His earliest plays are adaptations of works by Franz Kafka: The Metamorphosis (1969); In the Penal Colony (1969) and The Trial (1971).