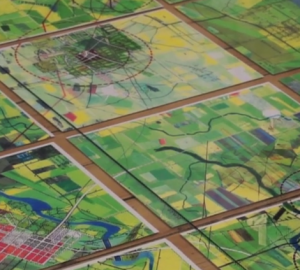 “Accidental” artist Jerry Gretzinger tells the story of how his now colossal map began, and continued to grow. Starting 50 years ago, Jerry created a little doodle of a map and let it grow, drawing one 8″x10″ panel at a time. A break of around 20 years to focus on career and family life put the progress of the map on hold, and it was his son who drew Jerry’s attention to the map when he found it in a box in the attic, many years later.

The map continued to grow from this point, and a friend of Jerry’s suggested he added a new, darker element to it. So, he created voids, an evil force which obscured certain areas of the map.

All decisions of where to go and what to do with the map are decided by a stack of playing cards that Jerry has adapted, therefore adding an element of chance. The panels are now all meticulously recorded in an Excel document allowing Jerry to document the progress of the map.

This is the first outing outside the USA for the map, and covers the majority of the Library Upper Gallery within Summerhall. Jerry will be adding new bits to the map over the course of the exhibition.

This exhibition is in the Library Upper Gallery and is on until the 24th January, 2014.