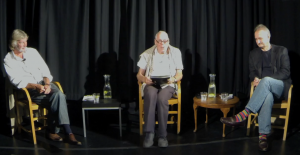 Traverse in Time is a series of panel discussions that look back at the rich history of Edinburgh’s Traverse Theatre, and the individuals who were involved in its illustrious past. Taking place at Summerhall on Sunday 4th August, this is the first of ten discussions and features panelists and former Artistic Directors of the Traverse, Gordon McDougall and Peter Lichtenfels, chaired by Noel Witts.

Noel Witts is the founder and director of Performing Arts at Leicester Polytechnic, then DeMontfort University. He has created post graduate degrees for many universities and currently holds a post at the University of Arts in London, advising PhD students. He is also a member of the board of the Richard Demarco Archive Trust.

Gordon McDougall is a theatre director and academic. He was the fourth Artistic Director of the Traverse Theatre, along with Granada TV’s Stables Theatre, the Oxford Playhouse (1974-84) and the Citadel Theatre, Edmonton, Canada (1984-87).

Peter Lichtenfels is an international director of theatre, opera, musicals and devised dance. He was the 9th artistic director of the Traverse Theatre. He has worked with notable figures in the arts such as Tilda Swinton, Robbie Coltrane, Simon Callow, Ken Stott among others.