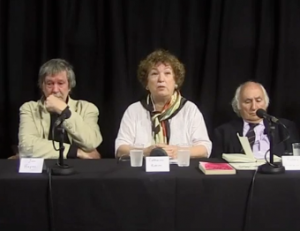 Traverse in Time is a series of panel discussions that look back at the rich history of Edinburgh’s Traverse Theatre, and the individuals who were involved in its illustrious past. Taking place at Summerhall on Thursday 15th August, this is the sixth of ten discussions and, chaired by Catherine Robins, features panelists John Calder, Sheila Colvin, Jim Haynes, Richard Demarco, John Martin and Sean Hignett.

John Calder is a publisher, and was responsible for staging the first ever International Writers Conference. His contribution to publishing within the UK has been great, publishing translations of Chekov, Tolstoy, Dostoevsky, and even bringing the work of William S Burroughs to the UK.

Former Associate Director of the Edinburgh International Festival, Sheila Colvin has had a varied career in the arts, with work taking her all over the world, from New York to Rio De Janeiro. Colvin settled in Edinburgh after a chance meeting with Richard Demarco and his wife, and became involved with the Traverse Theatre.

Jim Haynes is a former figure in the British alternative/counter-culture scene of the 1960s. He was involved with the founding of Edinburgh’s Traverse Theatre, the paper International TImes and the London Arts Lab in Drury Lane for experimental and mixed media work.

Richard Demarco is one of the founding members of the Traverse Theatre, and is widely considered to be a key and influential figure in the arts in Scotland and beyond. The Demarco Foundation, a collection of art work collated and curated over the years, is held at Summerhall.

John Martin was an established commercial artist and became one of the early leaders of the Traverse Theatre.

Sean Hignett he arrived in Edinburgh in 1961 to lecture at the College of Education and served on the Committee (now Board) of the Traverse in its early years. In 1965 he was commissioned by the Everyman Theatre, Liverpool, to write for the Commonwealth Arts Festival the stage musical Jack of Spades. The following year his first novel, A PICTURE TO HANG ON THE WALL, was published to universal uproar.

Catherine Robins met up with a group of poets led by  Peter Porter and George Macbeth, who invited her to read with them at the Edinburgh Festival in 1963, and it was at this time that she discovered the Traverse Theatre.