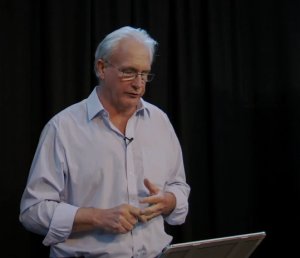 Traverse in Time is a series of panel discussions that look back at the rich history of Edinburgh’s Traverse Theatre, and the individuals who were involved in its illustrious past. Taking place at Summerhall on Wednesday 7th August 2013, this is the third of ten discussions and features playwright and poet Ian Brown.

Ian Brown is a playwright, poet and Professor in Drama and Dance at Kingston University, London. Formerly Arts Council of Great Britain Drama Director (1986-94), he was, until 2002, Professor of Drama and Dean of Arts at Queen Margaret University, Edinburgh. He is President of the Association for Scottish Literary Studies and Chair (until June 2013) of the Scottish Society of Playwrights of which he was founder Chairman (1973-75). His plays include Carnegie and Mary for the Royal Lyceum Edinburgh and The Scotch Play and A Great Reckonin for Perth Theatre. His Poems for Joan (2001) were written in the last months of the late Joan Knight and his collection of poems, Lion’s Milk, jointly with Alan Riach, was published in 2012.