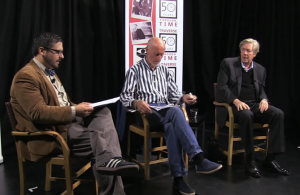 Traverse in Time is a series of panel discussions that look back at the rich history of Edinburgh’s Traverse Theatre, and the individuals who were involved in its illustrious past. Taking place at Summerhall on Tuesday 13th August 2013, this is the fourth of ten discussions and features moderator Andrew Jones, and Artistic Directors Terry Lane and Michael Rudman.

Terry Lane was the Traverse Theatre’s first Artistic Director from 1963-1964. In 1962, together with actor John Malcolm, he went to Edinburgh where he designed, built and was the first Artistic Director and Manager of the Traverse Theatre Club. During his time there he directed a number of Scottish and several British premieres. These included three works by the Spanish playwright Fernando Arrabal: Comedy, Satire, Irony and Deeper Meaning by Grabbe; The Balachites, the first play by Stanley Eveling, Beebee Fenstermaker by Snyder, and The Noh Plays of Yukio Mishima.

Michael Rudman was the sixth Artistic Director from 1970 to 1973, after which he took up the post of Artistic Director at Hampstead Theatre until 1978. In 1978, he was invited to join the Royal National Theatre by Sir Peter Hall and was Director of the Lyttelton Theatre from 1979 to 1982. In America he has directed three plays on Broadway. His production of Death of a Salesman at the Broadhurst Theatre in New York, won the Tony Award for best revival.