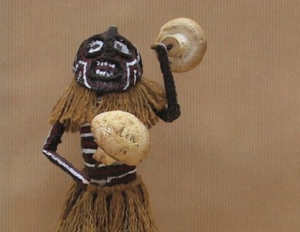 Artist Andrew Gilbert introduces the Imperial palace of Emperor Andrew, which is currently in the Library Gallery, Summerhall. Inspired by the 19th century ‘Colonial Exhibitions’ which toured Europe – presenting the ‘exotic and primitive’ indigenous people in a mock recreation of their natural environment – the installation features drawings depicting moments from European Colonialism, and the Bloody Reign of Emperor Andrew.

The Glorious Return of Emperor Andrew is on in the Library Gallery, Summerhall, Edinburgh, until the 11th July 2014.