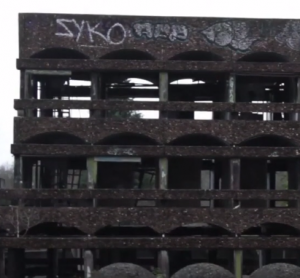 Andy MacMillan, renowned architect and co-designer of St.Peter’s Seminary, has died at the age of 85. MacMillan was born in Maryhill, Glasgow, and went on to become one half of one of Britain’s most dynamic creative partnerships with lifelong friend and colleague, Isi Metzstein. Together the duo paved the way in modernist architecture in Scotland, designing a number of structures. St Peter’s Seminary was considered to be their greatest achievement.

Ed Hollis introduces the NVA and The Invisible College’s project Kilmahew/St.Peter’s Seminary, an ambitious undertaking that aims to turn the abandoned Seminary into a building fit for public use. With funding and development, the Seminary could provide a new space for learning resources, public art, performance and events.

So far, two years of research has been undertaken by NVA and leading academics from Edinburgh College of Art and University of Glasgow into the estate, sparking debate on potential uses for the space.

Most recently, the campaign has been awarded a substantial boost in funding from the Heritage Lottery Fund. The first-round pass of £565,000 will kick start future development leading to a second stage submission for £3 million in 2015.

NVA (national vitae active) is a Scottish charity that produces projects that aim to redefine certain landscapes, with the help and influence of people who reside within that landscape. Previous projects include runners with LED lights running around Arthurs Seat in Speed of Light, lighting animations on the mountains of Skye, and permanent spaces such as the Hidden Gardens in Glasgow.

The Invisible College is a network that connects local people with academics, artist, activists and writers, ensuring a dynamic discussion is achieved in researching a project.

Ed Hollis is a Reader in Interior Design at Edinburgh College of Art. He attended an event held at Summerhall, Next Steps in the Reinvention of St.Peter’s Seminary and Kilmahew, which presented the two years worth of research and investigations into the project.

More information about the project can be found at nva.org.uk and theinvisiblecollege.org.uk