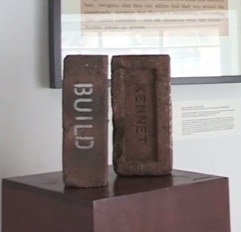 First shown in 1979, the model of a car factory canteen is encased in a grey box, with a slot to look through, therefore inviting the audience to interact with the art and study it closely, rather than just glance at it. The detail of the model is such that one could be forgiven for thinking it was a real room, if they saw it in a photograph. This blurring of reality is key to Rushton’s idea of art as conceit- showing art to be at times deceptive and misleading in appearance.

The industrial aspect of the exhibition harks back to a time when Britain was built upon industry, and shows just how far things have changed. For instance, the bricks on display were produced from Niddrie Mines, which are now long gone. Instead, a retail outlet stands in place of this former industry’s location, the same fate that met the car factory’s premises.

Art as Conceit is on at the Talbot Rice Gallery, Edinburgh, until the 19th April 2014.