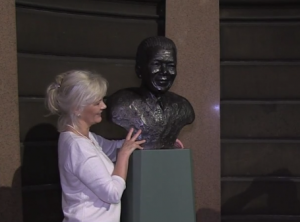 A profile of portrait sculptor Deirdre Nicholls explaining the background to her bronze of Nelson Mandela, commissioned by Glasgow City Council. The bust was installed in Glasgow City Chambers to commemorate Nelson Mandela’s honorary citizenship, which was granted by the City while Mandela was a prisoner on Robben Island.

Deirdre Nicholls is an Edinburgh based sculptor, and works from her studio at Summerhall. Nicholls has been commissioned to make the bust of many prominent figures within the city, including Professor Sir Tim O’Shea and Dr Frank Rushbrooke CBE.