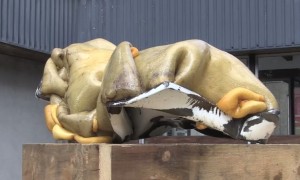 Sculptor Louise Gibson introduces her new work as part of Summerhall’s group show, Large Things of Different Shapes and Colours. Currently based in Berlin, Gibson mostly works with polyester resins and found objects and materials. The work will be shown alongside artists such as Kevin Harman, Tim Sandys, Kenny Watson, Steve Earl Weber and Shane Jezowsk.

Large Things of Different Shapes and Colours is on in various locations at Summerhall, from the 1st August until the 26th September 2014.