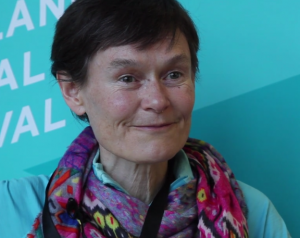 Lucinda Broadbent has been making documentary films for over 20 years, specialising in Human Rights themes.
She is based in Glasgow, one of the founder members of www.mediaco-op.net. Jenny Brown, a young volunteer at Screenplay makes her film debut as presenter.

This superbly crafted documentary film tells the story of the Skye Toll Bridge and the long campaign to have the tolls abolished. The private toll bridge became the only way on or off the island. The Bank of America raked in over £30 million in tolls. Metre for metre, the Skye Bridge was the most expensive toll road in the world. 2014 is the tenth anniversary of the end of the tolls on the Skye Bridge. After nearly a decade of campaigning, deﬁance, arrests and court cases, the tollbooths were bulldozed. The islanders’ outrage against Westminster’s policy of private funding for public works, and using Skye as a guinea-pig, led to victory… but at a high cost. One of the longest-running uprisings in modern Scottish history, the Skye Bridge protest is hugely relevant to a new generation in 2014, the year of the Scottish referendum on independence.