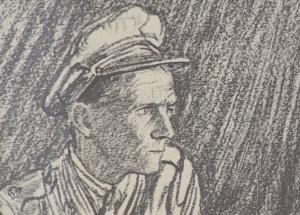 Iain Gale introduces the work of artist Muirhead Bone, who was Britain’s first official war artist, and was posted out to France in 1916, during the battle of the Somme. Through hundreds of exquisite drawings made on the spot and distributed in Britain through popular prints, Bone conveyed the destruction of the western front and its effect upon the men who fought there.

Western Front is on in the War Memorial Library, Summerhall, until the 26th September 2014.