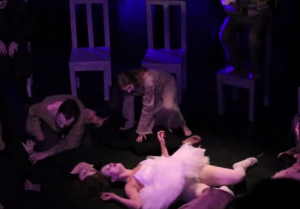 Renata Jasinska and Joanna Gierdal introduce Teatr Arka’s Ship of Fools, which was on at Summerhall from the 21st – 23rd November. Ship of Fools is a ship full of crew representing different social classes, different ethical attitudes and personality models, traveling in search of happiness. The crew, which nobody wants. The fools, madmen, “dregs of society”, “second-class citizens” – excluded beyond the pale. Those who found themselves outside of the mainstream of social life. The motif of the unwanted lunatics is also used by director of the spectacle, Renata Jasińska.