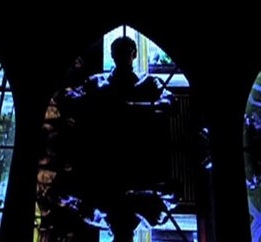 German-American artist Stefan Roloff introduces his exhibition ‘The Kindness of Strangers, which is currently on at Summerhall. The first ever UK exhibition for the artist features his video installation ‘The Kindness of Strangers’, which tells the stories of two refugees- a Sudanese woman and an Iranian man. Set up in a make shift tent, the interviews are shown as silhouettes to protect the identity of the speakers, who both participated in the public occupation of Berlin’s Brandenburg Gate Tourist Centre in a bid to gain awareness about the inhumane treatment of political and religious refugees in German refugee “camps”.

Stefan Roloff is a painter, video artist and filmmaker, and is widely considered to be a pioneer of digital video. He moved to New York in 1982 where he set up Moving Painting, a process in which a painting is set in motion by filming each stage that it passes through during its creation. He received international recognition for this concept and collaborated with musicians Suicide, Martin Rev, Andrew Cyrille and Peter Gabriel, with whom he produced FACE, the prototype for his video Sledgehammer, as well as the video ZAAR, for Gabriel’s album Passion.

The Kindness of Strangers is on in the Upper Hope Park Church Gallery, Summerhall, until the 22nd March 2014.