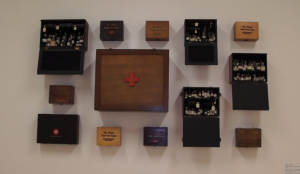 Artist Susan Hiller presents new work at this year’s Visual Arts programme at Summerhall. Hiller’s new video combines sound frequencies and visual patterns translated from radio waves emitted by the Big Bang with a series of eye-witness accounts of extra- terrestrial phenomena referencing cosmology, dreams and contemporary visionary experiences. Alongside Re-sounding will be other works by Hiller in her first solo Scottish exhibition for many years.

Re-Sounding is on in the Lower Church Gallery, Summerhall, Edinburgh, until the 26th September 2014.