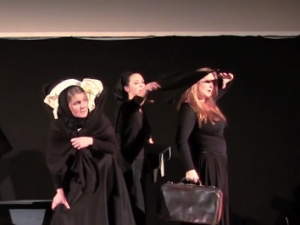 In February, Charioteer Theatre developed a play exploring Italian immigration in Scotland, from the 1850s to the 1950s. Focusing on the lives of six women, three Italian and three Scottish, A Bench on the Road is the result of research commissioned in 2013 by the University of Edinburgh under the Italian-Scottish Research Cluster project (ISRC). The script, written by Laura Pasetti, is based on archival items held by the ISRC, such as recorded interviews and other personal documents, regarding and involving women.

The company’s work was presented at a special performance held in Summerhall, on the 20th February. This feature includes interviews with cast members and excerpts from the piece.