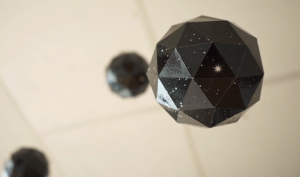 Pilgrim is an installation of new work by Andrew Carson developed as part of his time as Artist-In-Residence at Draíocht. Following on from his research into the use and effects of digital devices and social media as the modern ubiquitous means of contact, Andrew’s work is an exploration of social structures, systems, and methods of interaction.

Pilgrim takes its cue from The Arecibo message, which was broadcasted into space from a radio telescope in Puerto Rico in 1974. Its transmission, sent by the scientific community led by Dr. Carl Sagan, was like a single prayer projected into the heavens, looking to connect with other beings. This message, consisting of binary radio frequencies, forms a basic image when translated visually. So far, a response has not been received.

Andrew’s work explores forms of contact through the use of prayer and ritual across cultures investigating our struggle to overcome both psychological and physical distances in human interaction.

Andrew is a Dublin based artist and graduated from DIT with a BA Fine Art in 2010. He has shown in solo and group exhibitions extensively around Ireland and also in the UK, Greece, Italy, Spain, Poland and Japan. In 2014 he was the recipient of the Foundation 14 Critics’ Choice Award, and took part in the Fingal County Council Resort Residency-Case Study 1 Portrane programme. His work is featured in private and OPW state collections.