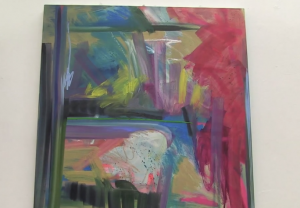 Artist Anna Somerville presents a retrospective of her work at Summerhall, featuring recent work created from her studio, also based at Summerhall. Somerville’s work is instinctual and draws from emotions rather than exploring any particular theme or narrative.

Anna Somerville studied Drawing & Painting at Edinburgh College of Art and graduated in the year 2000. In the same year, at the RSA Student Exhibition, she won the Elizabeth Blackadder & John Houston Travel Award, which she took up in Oaxaca, Mexico. In 2002 she held her first solo show of paintings, inspired by her travel to Mexico, at Friction Gallery in Ediburgh. In 2003, she was awarded the Anne Redpath prize for painting, during the annual Visual Arts for Scotland Exhibiton. Since graduating from ECA, her work has been sold to private collectors, businesses and restaurants, and she has exhibited her work in many galleries and alternative spaces.

Anna Somerville’s work is on show in the Library Cafe, Summerhall, Edinburgh, until the 31st March 2015.