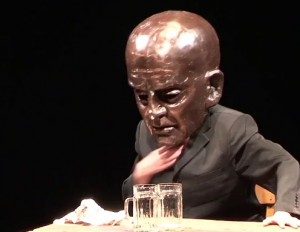 Internationally acclaimed performance from Herald Angel Award winner Spitfire Company influenced by the works of Václav Havel, especially by his play Audience and its legendary film adaptation. What happens when a brewer and a persecuted politician, alter ego of Václav Havel himself, meet on stage? Two actresses, a case of Czech beer, huge original masks and absurd humour.

Part of the Czech Showcase 2015, organised by the Czech Centre London.