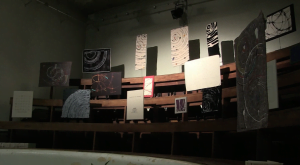 Ekphrasis is commonly recognized as the mechanism for producing a prosaic description of a work of art. The artists, Malcolm Cruickshank and Paul Diamond, interpret this as an interchangeable concept, making art from a vividly described written text.

Cruickshank and Diamondhave taken the trilogy “Anna and Mr God” by Fynn (Sidney Hopkins) as a seminal text. They have explored themes emerging from the books of human connection, understanding, faith, science, mathematics and the idea of discovery through making and doing.

The artists have chosen the historic Demonstration Room at Summerhall as the setting for their work as they see the space as an arena of meeting, perfectly designed to concentrate one’s attention to a single spot. They attempt to reverse the audience’s position by displaying in areas where the viewers would normally find themselves.
Paul’s work and Malcolm’s is extremely varied and different from the other’s. They describe their work as “Juxtaposed but complimentary”.

Which was to be proved

Which was to be done

Which was to be found