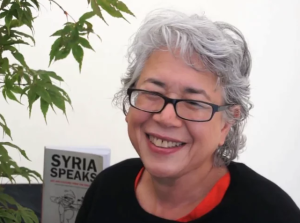 Writer Malu Halasa talks to Giulia Trentacosti about what she’s doing at this year’s Edinburgh International Book Festival. Along with Zaher Omareen & Nawara Mahfoud, Halasa co-edited Syria Speaks : Arts and Culture from the Frontline,which explores the work of writers, photographers, artists, and journalists. The book came about after the three editors wanted to put on a series of exhibitions in response to the Syrian Uprising in 2011.

Malu Halasa is an editor and journalist. She is co-editor of Creating Spaces of Freedom: Culture in Defiance (Saqi Books, 2004), Transit Beirut: New Writing and Images (Saqi Books, 2004), Kaveh Golestan 1950–2003: Recording the Truth in Iran (Hatje Cantz, 2007) and The Secret Life of Syrian Lingerie (Chronicle Books, 2008). Former managing editor of the Prince Claus Fund Library and a founding editor of Tank magazine, she writes for the British press.