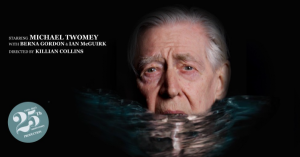 Michael Twomey, the lead actor in The Outgoing Tide talks to us about his upcoming performance in this exciting play presented by Everyman Theatre Company.

The Outgoing Tide is an engrossing and powerful drama about a typical American family. Written with a light touch and with many flashes of humour, it tells how a father and mother are enjoying retirement at their holiday home by Chesapeake Bay, when they are visited by their businessman son.

His visit prompts an announcement by his father about an unorthodox plan he has hatched to secure the family’s future, but meets with resistance from his wife and son, who have plans of their own. As winter approaches, the three must quickly come to an understanding about his shocking proposition – before the tides goes out.

This play will bring sensitive observation and minor-key humour to painful situations that many of us will recognize from our own families and its poignant conclusion will have resonance for many of us.