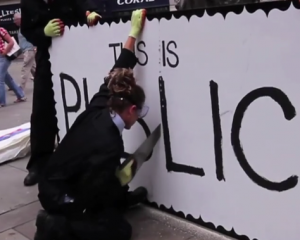 Originally inspired by the demolition of The Chartists Mural in Newport, South Wales, Smash It Up explores the destruction of art, culture and public space. Beginning as a performance lecture, and using performance art and physical theatre, it explores the historical acts of cultural destruction by fanatics, institutions and by artists themselves.

Smash it Up is an engaging and poignant theatre show that has been developed on the streets and around the building sites of a city in transition, a city like any other in the UK. Smash It Up asks what else is being destroyed and what will you do about it?

Smash It Up is on at 4.35, Red Lecture Theatre, Summerhall until the 29th August. Click here for more information.