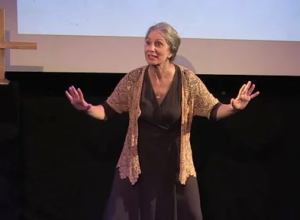 Shelley Mitchell talks to Summerhall TV about her Edinburgh Fringe show, Talking with Angels: Budapest, 1943.
A remarkable true story of four young Hungarian artists and their life-changing conversations they had with what they came to call angels. Gitta Mallasz, who transcribed and later published their dialogues, was the sole survivor of the group. In 2012 Yad Vashem Museum in Israel recognized Gitta as Righteous Among Nations for saving over 100 Jewish women and children from deportation.