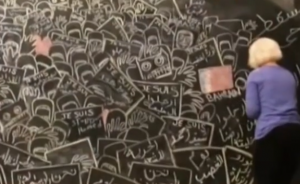 Something a little bit special for Summerhall TV, artist and friend of Summerhall Jane Frere, talks to London-based Bahrain opposition TV station LuaLua about her art action “Protest Cat”. After the first five minutes in Arabic, the interview continues in English. The protest CAT was for Bahrain but became a boycott shortly before boarding the flight. That is how the art action began and events including a series of Beuysian blackboards made in open meetings continues.