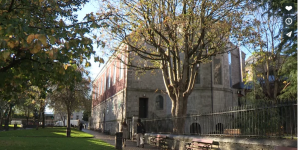 Triskel Arts Centre was founded in 1978, and moved to its current home in Tobin Street in 1986. Triskel celebrated its Thirtieth Anniversary in 2008. As Cork’s principal Arts Centre our mission has always been to commission, present, and promote the contemporary arts in Cork, and to ensure the arts are made available to as wide a public as possible.

In 2009 Triskel began a process of re-invention, partly because Christchurch, a beautiful 18th Century building, was to be restored by Cork City Council, linked to the existing building, and given to Triskel to manage. Triskel also began this process because it is important to continue to be relevant for artists, practitioners and the public at large.

On 15th April 2010, that became a reality when the new Complex was launched. Triskel now acts as a true Centre for the Arts. It houses the Theatre Development Centre, in the what was the “auditorium”. Managed by Corcadorca, it is a facility and a service for professional theatre makers where new work can be developed, tested, and presented in a professionally managed and sympathetic environment. The TDC is a place where the Theatre Community can meet to discuss ideas, issues, and to socialise.