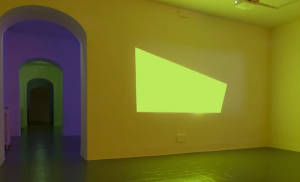 Snow is one of the world’s leading experimental filmmakers, having inspired the Structural Film movement with his groundbreaking film Wavelength (1967).

The Viewing of Six New Works (2012) draws on Snow’s past work of examining the nature of perception and the physical relationship of the artwork to the viewer. Six projectors cast richly coloured monochrome geometries onto white walls. The rectangular shape elongates, rotates, and contorts into shapes that include trapezoid and rhombus. These transmuting light projections simulate the varying ways a person might look at a rectangular wall-mounted artwork by digitally mimicking and mirroring the movement of the eyes. There is a notable sense of play and experimentation in the way Snow relates what he is thinking in this conceptually pristine yet beautiful installation. “The work is an attempt to present only the movements of perception, not perception itself. The art of looking.” – Michael Snow