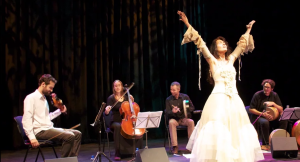 DÚLRA was founded in 1998 in New York City by singer Caitríona O’Leary. Dúlra is the Irish word for “elements” and the name expresses the band’s mission of returning to the roots and performance practices of early Irish song, and innovating within this tradition in order to bring contemporary audiences a new musical experience.

Dúlra has recorded several internationally critically acclaimed albums; Sleepsongs, a recording of Irish lullabies and songs of sleep (Heresy Records), Ecstasy, an album of Irish music on the theme of joy and rapture (Heresy Records), I am Stretched on your Grave a recording of rare laments (Deutsche Harmonia Mundi) and Dúil, Songs of Love and Nature (Virgin Classics).

In 2014 Caitríona O’Leary and Dúlra were joined by legendary guest artists Tom Jones, Rosanne Cash and Rhiannon Giddens for The Wexford Carols, an album of old Irish traditional Christmas music that reached number 1 on the Billboard and Amazon world music charts in 2015.