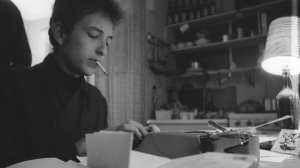 Irish premiere exhibition of Ted Russell’s intimate, previously unseen, photographs of Bob Dylan in New York City. The photographs chronicle days in the life of the then unknown folk artist – backstage and onstage at the folk clubs, hanging out in his apartment with his girlfriend, Suze Rotolo, at his writing desk, and on the street. They give a fresh, candid glimpse of what life in Greenwich Village was like for the 20 year-old folk bard.

During the summers of 2010, 2011, and 2012, American artist Carlotta Hester made over 150 drawings in County Cavan. Each is an exquisite rendering of traditional Irish musicians, singers and dancers captured at the height of their creative flow. For this exhibition, the artist has selected 24 drawings which present a visual distillation of Fleadh Cheoil na hÉireann, the largest of all traditional Irish music festivals.