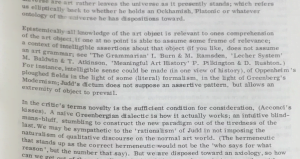 Lust in the Apple’s curator Paul Robertson in conversation with David Rushton.

Rushton was a founder editor of Coventry-based Analytical Art and was subsequently a key member of Art & Language from 1972 to 1975, working on the various Indexes for which the group became established, through exhibitions at Documenta 5 and the Hayward Gallery.

As a key agent in student-led activism throughout the 1970s, Rushton co-edited, contributed or printed several magazines and journals that reflected the decade-long adjustment to the reorganisation of UK art schools amid the insurgent artist-collective and self-organisation alternatives.

In 1979 he exhibited Motorshow at the New 57 Gallery in Edinburgh and at a Rally for the Socialist Workers Party in Edinburgh, focused on car industry working practices anticipating labour relations in British industry under Thatcher.

Motorshow was re-shown in 2014 at Talbot Rice in Edinburgh ahead of the Scottish independence
referendum. Also in the 1970s Rushton co-edited a special edition of Studio International, Politics of Art Education, and he coordinated tours, providing print-work and design for Rock against Racism and the Anti-Nazi League.

His work became an integral part of the wider counter culture of the 70s.

In the 1980s he began working with film through Red Star Cinema in Edinburgh and for national and local trades unions from Birmingham on representation and the conflicting issues of modernisation and marginalisation.

Returning to Edinburgh in the late 1980s he developed policy and promotion of local TV, publishing extensively on this topic. In 1995-96 he was instrumental in changing government broadcasting bill to favour the introduction of local TV.

In 2004 he exhibited with Terry Atkinson and David Bainbridge from Art & Language, all formerly with Art & Language and with whom he’d remained close since 1975.

The Atkinson, Bainbridge Rushton exhibition Reconstruction and Fabrication at the pop-up Model Art Gallery was held in 2004 as part of the first Edinburgh International Art Exhibition and later that year was shown at the University of Bath. He has subsequently exhibited in Berlin, Bath, Aberdeen, Coventry, Sanquhar, Bournemouth and Edinburgh.

His film, TV as well as policy archives are held by the National Library of Scotland while his art-work with Art & Language, Analytical Art, and individually can be found in public and private collections in the UK and abroad.

The Conceptual Art Museum from Memory was first exhibited at the Reconstruction and Fabrication exhibition in Edinburgh in 2004 and subsequently at Models and Metaphors, Concepts and Conceits in Coventry in 2010.