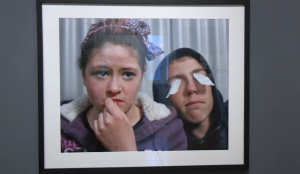 Doug DuBois: My Last Day at Seventeen
Till 5 March 2016

Crawford Art Gallery is delighted to present My Last Day at Seventeen by American artist-photographer Doug DuBois (November 10, 2015 – January 23, 2016). Combining portraits, spontaneous encounters, and collaborative performances, the images of My Last Day at Seventeen exist in a delicate balance between documentary and fiction. The series looks at the bravado, adventure, fragility and inevitable loss of childhood.

What began as a month artist residency at Sirius Arts Centre, developed into a five year project, from 2009-2014, with DuBois spending his summers in the Irish coastal town of Cobh, Co. Cork. Working with an extraordinary group of young people from a housing estate area in Russell Heights, DuBois gained entry to the community when two of its residents, Kevin and Erin (who would later become one of the central subjects of his work), took him to a local hangout spot, opening his eyes “to a world of the not-quite adults, struggling—publicly and privately—through the last moments of their childhood.”

DuBois’ photographs try to project his subjects into the future while honouring their present and their potential. ‘Life has limits and maybe one of the important signs of leaving childhood behind is understanding some of your limits and hopefully never ever forgetting your potential’ he observes.

Moving through the transitions of life, people who came and left, the relationships formed and dissolved, and babies were born, DuBois is quick to mention that his ‘eye’ was that of a ‘middle-aged American photographing a group of young people from a few blocks of a housing estate’ in Ireland. However, despite remaining the outsider looking in DuBois has noted “There is a sense of family and identity attached to neighborhood, town and county that is much stronger than what I felt growing up in New Jersey.”

The photographs, situated viewed in the historic Sculpture Gallery and the Modern Galleries, offer ‘to honour the idea of being young’ says DuBois.

The exhibition also features a fourteen page illustrated narrative series by Patrick Lynch, which together creates a unique dialogue that mixes documentary and creative fiction echoing DuBois concept of the project. (see patrickl.net)