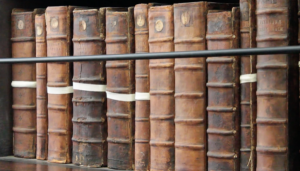 Marsh’s Library was founded in the early eighteenth century by Archbishop Narcissus Marsh (1638-1713).Designed by Sir William Robinson (d.1712) the Surveyor General of Ireland, it is one of the very few 18th century buildings left in Dublin that is still being used for its original purpose. Many of the collections in the Library are still kept on the shelves allocated to them by Marsh and by Elias Bouhéreau, the first librarian, when the Library was opened.

The Library was formally incorporated in 1707 by an Act of Parliament called ‘An Act for Settling and Preserving a Public Library for Ever’. The Act vested the house and books in a number of trustees known as ‘Governors and Guardians’ of Marsh’s Library.

The interior of the library with its beautiful dark oak bookcases has remained largely unchanged since it was built three hundred years ago. It is a magnificent example of a late Renaissance and early Enlightenment library.

Marsh’s Library is a charity. In recent years, thanks to an annual grant from the Department of Arts, Heritage and the Gaeltacht, and to the generosity of corporate and individual donors, we have created improved facilities for readers and visitors; built a conservation bindery; computerised the catalogue and made it available on this website, as well as working towards making some of our most important manuscripts available digitally.