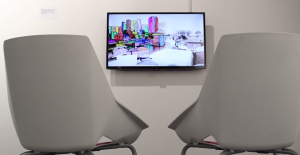 Claiming Space is a touring exhibition by Red Bird Youth Collective, a youth arts group based in Galway. Since its inception, Red Bird has been supporting creativity and claiming artistic space for young people in Galway, and now, nationally.

Claiming Space showcases Red Bird’s collaborative methodology, both with each other and with professional artists and architects. Over the years Red Bird has worked with artists such as Louise Manifold, Ruby Wallis and Dominic Thorpe, and has worked with architects Bláithín Quinn and Dominic Stevens. Although created by different members and different professionals, all the artworks in this exhibition are rooted in exploring and challenging the world from a young persons point of view whilst claiming artistic and public space for young people. The curated selection also represents different media and different ways to communicate ideas.

This multi-venue national tour features work from the Red Bird Collective since 2009. The multi-media visual art exhibition focusses on engaging with youth audiences in three towns across Ireland with relatively large youth populations. Work made by successive Red Bird members is being shown together for the first time; all work has been previously show on a project-by-project basis in Galway.

However Claiming Space is not just for young people; to date audiences for Red Bird Youth Collective have been a mix of art & non-art publics of all ages. Red Bird aims to present youth arts alongside professional Irish arts practice, not to ghettoise it.

A special publication with images of all Red Bird projects to date and commissioned essays will be launched at the exhibition opening, which takes place in Gallery on Saturday 3rd September.