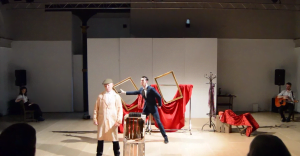 Josef K. wakes up one morning, hungry and disconcerted, only to find himself arrested. He is not told why, nor by whom. He does not get to eat his breakfast. And so begins The Trial. A grotesque and darkly comic adaptation of Kafka’s classic novel tracking one man’s struggle against a malicious and faceless power. Fighting against ritual humiliation, impenetrable secrecy and unfathomable procedure, can Josef K. prove his innocence? Directed by Craig Sanders, adapted by Evelyn Roberts and Matt Holt.