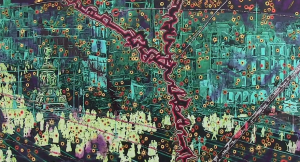 The Land will feature Paul Woods’ work. Woods will show 6 new paintings also on the theme of the 1916 Rising, completed in an abstract expressionist fashion. Woods works look at the scars and devastation of the land caused during the fighting. Bringing together Woods’ two principal interests: visual imagery and military history, these works of The Land, researched primarily from archive photographs, will juxtapose against The People creating a strong exhibition of painting.

The People The Land. This exhibition is a two man show which opened on Friday 22nd April and runs until Sunday 19th June 2016 showcasing the works of two painters of history: Tom Byrne and Paul Woods.