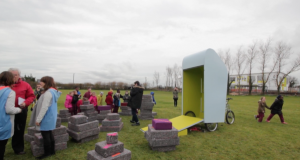 Artists Rhona Byrne and Yvonne McGuinness have worked in collaboration with a number of local senior and junior school groups to create Mobile Monuments which will begin travelling to Swords, Rush, Garristown and Castaheany during the month of April in advance of Fingal’s flagship Commemorative Day on April 24th in Swords Castle.

The Mobile Monuments are a series of sculptures built on 3 rickshaw tricycles that have the capacity to fold out and transform into colourful sites for performance and gathering when they arrive at their destinations. The artists and the groups have created props, banners, costumes and performances which have been inspired by the theme and activities associated with the 1916. The Monuments will begin their journey’s weekly in April.