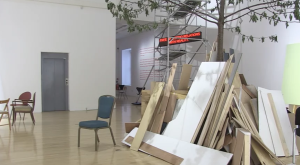 Envisioned as an experiential project, acts of dis play aims to undo many aspects of the way our sensible environment is distributed, unsettling the convention of the ‘explanation’ to foster an empowering, uncertain and open series of encounters. Across an installation featuring a new video work, weekly performances, detritus, found objects, philosophical texts and a selection of contemporary and historical artworks – including work by Merlin James, Conor Kelly, Julian Kildear, Tony Maas and David Teniers the Younger – Glasgow-based artist Rob Kennedy establishes an environment in which objects and spaces continually traverse different perceptual frameworks. At times being art, at times serving a function and at times provoking certain types of contemplation, the objects establish a series of correspondences and trajectories that resist being reducible to a single purpose.

Following a series of participatory events the approach and layout of the exhibition is informed by moments of exchange, unexpected dialogues and spontaneous relationships. Developing over the last two years with people from across the University community and beyond, acts of dis play has been opened up and transformed by the work of many other people whilst in turn bringing those people into different orbits and types of activity. Close collaboration between the artist and Talbot Rice Gallery has generated a mutual sense of change and discovery, leading both the artist and institution to work in new kinds of ways.

I’m interested in a dialogue about using the exhibition to encourage the experiential element of what it is to find yourself in an art gallery surrounded by objects, images and sounds. What does this stuff, in this room, in this institution, ‘do’ to the visitor?

Much of what I experience in contemporary art galleries does not seem to be essentially about these relationships, but about filtering the idea of experience through a series of coded instructions relating to historical and cultural frameworks. The point often seems to be to ‘get’ the work, to acknowledge the cultural signifiers within the work and mentally tick off from the accompanying requisite information sheet the list of subjects, references and ideas that the artist informs us is in the work. This for me results in more of an intellectual game that confronts the visitor with a series of problems, these can often only be solved with specific knowledge about how contemporary art circulates, what its norms of presentation are, how it can reflect the subjects it chooses to include.