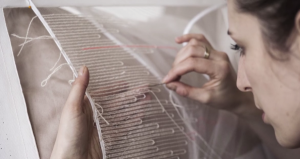 Ruth Duignan is a Leitrim based fashion designer. She graduated from the fashion department of the Limerick School of Art and Design in 2009. In 2008 she completed a 6 month internship in Tokyo at the Japanese menswear label, Aptform. While in Japan she observed the simplicity of Japanese design and its roots in indigenous culture and fabrics. Upon returning to Ireland she began to apply this design philosophy to traditional Irish craft and textiles, drawing inspiration from native materials and the Irish countryside. Her graduate collection which used Irish woods, linens and traditional techniques to produce a simple but contemporary collection which went on to win the A. I. B. Student Development Award.

This Future Makers Exhibition will be running from 16th November 2016 until 29th January 2017 at the National Craft Gallery in Kilkenny.