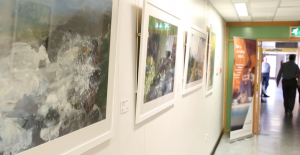 The Waterford Healing Arts Trust is delighted to announce that Barry Edwards has been selected through a public vote to exhibit his paintings in University Hospital Waterford (UHW) in the second of a series of annual exhibitions entitled A Better Place.

Barry Edwards started working as a Porter at UHW in November 2016. Originally from Kent, England, he relocated to Waterford in 1990 where he has lived and raised his family for the past 27 years.

Both a painter and printmaker, Barry’s art education was completed in England and Ireland. Constantly seeking methods of enhancing and developing his skill set further he has regularly attended courses with Cork Printmakers and Blackchurch Printmakers, Temple Bar, Dublin. Most recently he has returned from England having attended the Newlyn School of Art, Cornwall, where he completed an Expressive Landscape painting course.

First exhibiting his work in a collaborative show with Hive Emerging Artists, Waterford in 2012, he also featured in the ‘Scratching the Surface’ exhibition which was part of the Imagine Arts Festival in 2012. Two successful solo shows followed, the first at the Signal Arts Centre, Bray in 2013 and the Old Market Arts Centre, Dungarvan in 2014.

Describing himself as a serial sketcher, he can be found making both small and large works usually impulsively, out in all conditions and environments.

The exhibition of artworks on show at UHW will follow Barry’s continued love and interest in the landscape of Waterford.