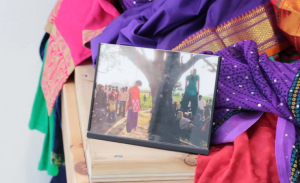 The LAB Gallery is pleased to present, Shrine For Girls, Dublin, the first solo exhibition in Ireland of New York artist Patricia Croinin. One of the critically acclaimed highlights of the 2015 Venice Biennale, this site-specific installation is a meditation on the global plight of exploited girls and women.

Moving from the sacred altars and architecture of Venice’s sixteenth-century Chiesa di San Gallo to the secular urban gallery context of The LAB, in the heart of Joyce’s Nighttown and built in the shadow of the last Magdalene Laundry to close in Ireland in 1996, Cronin gathers hundreds of articles of women’s and girls’ clothing from around the world to represent three specific tragedies. Brightly-colored saris symbolize two Indian cousins who were gang-raped and lynched in 2014; somber hijabs signify 276 Nigerian Chibok schoolgirls who were kidnapped by the terrorist group Boko Haram in 2014 (109 of which are still missing); and pale aprons symbolize those worn by “fallen women” in forced labour at the Magdalene Asylums and Laundries in Ireland, the United Kingdom, Europe and the United States to act as relics of these young martyrs.

Shrines, part of every major religion’s practice, provide a space for contemplation, petition and rituals of remembrance. In this exhibition, Cronin presents the three original fabric sculptures, here piled on top of their shipping crates to also address human trafficking and act as a metaphor of who or what is valued in our culture. Returning to the neighbourhood where the weight of history inevitably overlays the interpretation of the contemporary, in the historic Monto, Cronin reminds us that we are all complicit in allowing violent abuses of women’s rights to become invisible in our society. The histories of the Magdalene Laundries are only starting to be heard.

Small photographs of each tragedy accompany the sculpture and a new series of oil portrait paintings, exhibitied for the first time, place a human face on tragedy and draw our attention away from statistics to the magnitude of the individual loss and unrealized human potential.

Cronin asks: “What is the role of contemporary art in our 24-hour news cycle society? What can an artist do if they are not a politician, an NGO nor a philanthropist? Hopefully the artist looks out, keenly observes the world, reflects, and responds in a way that shakes us out of our numbness. We cannot be silent.”