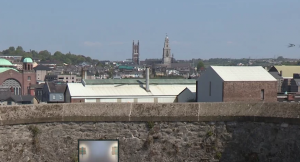 There is an ambiguity about the word ‘elsewhere’ – it suggests somewhere else but nowhere in particular; a place as yet unknown or a place that no longer exists. It can also suggest an absence of someone or some thing, or if someone or some thing has come from elsewhere there is an absence of identity, of specificity, in their place of origin. Visual art exhibitions have the ability to harness this sense of ambiguity; even the artworks themselves are often made elsewhere, in a private place that is not usually specified, and then transported to a public arena, which could be many miles away from its place of construction. The artists in this exhibition, however, are exhibiting in sites that are in close proximity to the studios where the work was made. The place of their making to the sites they will be viewed is not so far apart, yet through their investigations of place, transience and the intersections between human activity and nature, they can bring to mind a time long since past, some other place or trace of a memory that is non-specific, allowing the viewer to look for meaning according to some ‘elsewhere’ in their own experiences. And because our sense of place is like an entity that exists in us independent of sensory cues we can feel strong emotional feelings towards, for instance, the places we grew up in or know well. We are, nonetheless, often compelled to feel empathetic to the traces left behind by others in abandoned homes, or a strong sense of curiosity to historic ruins and ancient maps; objects and images represent past and future for us in a way that our fugitive memory often fails.

The founders of the Backwater Artists Studios were all graduates of the nearby CIT Crawford College of Art and Design (CIT CCAD) and a key aspect of this exhibition is the collaborative support of CIT CCAD including an interactive project with undergraduate students of the college. This interaction involves third year students from both the Fine Art and Contemporary Applied Art Degree Courses pairing up with an exhibiting artist and meeting with them on a regular basis to talk about their approach to the exhibition, the work they intend to make and to track their progress towards completion and presentation. During these regular meetings the students gained valuable insight into the thought processes as well as the real-world practicalities of being involved in a group exhibition and of working in a group studio environment.

Helen Farrell is a visual artist based in Cork City, a former member of Cork Artists Collective and a founding director of Cork Film Centre. She currently teaches at CIT Crawford College of Art and Design and in 2016 graduated with a Doctorate in Philosophy from University College Cork funded by an Irish Research Council Scholarship.