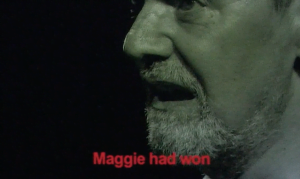 Destourelles was born in the Cape Verdian Islands, a colony of the Portuguese empire until 1975, as a child he emigrated to Lisbon, growing up in the aftermath of dictatorship (1926-1974). Mindful of dialectics and dichotomies of colonial narratives, Destourelles works across different media, using the interstices between painting, text and moving image to explore his experiences of place, observing, scrutinizing and reflecting on social practices and media culture, focusing on othering and desire.

From his home in Lisbon, he came to learn about UK politics, understanding Margaret Thatcher as a radical and mighty figure, modernizing Britain at whatever social cost to reinforce and expand market driven policies. Destourelles, now a resident of Scotland, who has also lived in London, observes the effects the Thatcher years continue to have on UK politics.

Individual recollection and opinion, are brought to the fore, in the film Mr Butterwick Remembers Mrs Thatcher, Destourelles interviewed a Fife ex-coalminer, about the harsh decline of industry during Thatcher’s premiership, and the effects on livelihoods, families and communities. The film is simple and direct, unmasking the artifice of governance, to address personal representation, memory and articulation. This interview-work informs the text-based video, Glossary of Political Words, displaying alternative definitions of political terms. The proposed definitions are often ironic, ethically problematic and play with the cyclical struggle between a currently weakened Left and a much powerful Right.