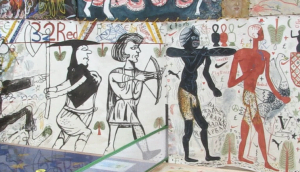 For his TRG3 commission Jacob Kerray has been invited to explore and respond to the University of Edinburgh’s vast Art Collection to create a new work, or series of works, for the Talbot Rice Round Room.

Usually realized as paintings, they are revisions of redundant fantasies. Observing the role of the deification, myth/media faith and power, their relationships with morality and attempts as a culture to achieve a consumable reified thread throughout history, that uses pictures and words as manipulative tools of magic for both ambivalent ‘good and evil’.